Back in the mid-90s I spent two years on and off in Bosnia where there had just been a war.

Quick review: in about 1993 a First World Country slipped into genocide in a matter of weeks, goaded by flagrant racist propaganda on TV…. an advanced multi-ethnic European country with push-button telephones, color TV, automobile factories, where there had been a Winter Olympics, became a killing field. Because of emotions whipped up on TV by cynical politicians, some of whom have now been convicted as war criminals.

I saw this myself. The people who managed my work there worked in Sarajevo in what was left of UNIS towers, the shot-up burned-out buildings here. They had been seat of 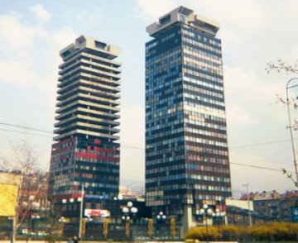 government before they were  shelled for 40 months at virtually point blank range.  I stayed sometimes nearby in the livable wing of the Sheraton, the part that had not been within the field of fire from the Serbs. I spent weeks in Banja Luka, a Serb enclave, the site of the Ferhat Pasha Mosque, built in 1579 and bulldozed to rubble in 1993. It was a country largely run by thugs, where homes were occupied by refugees whose own homes someplace else were occupied by others, where 200,000 were dead, injured or just missing in three years, essentially one human being out of every twenty.

Sarajevo when I arrived was pockmarked with shrapnel. All the trees had been cut down for heat and cooking during three years of 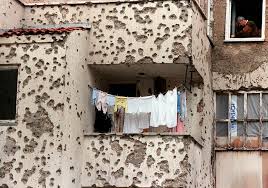 merciless siege. Where there had been parks were now grave yards. There was never a day when the hotel had heat, electricity, and hot water at the same time. Sometime there was none of the three. The economy was built on smuggling and cash — Deutsche Marks, traded illegally for dollars in doorways everywhere. We traveled in armored convoys, and because of mines sown and forgotten we never stepped off the pavement. A Reuters correspondent I knew always checked his undercarriage for bombs whenever the car had been out of his sight.

The distortions, lies and fake news also didn’t end with the truce. Large numbers of people are displaced, probably forever. Survivors were deeply suspicious of each other. Children are still raised to fear and hate. I had an embarrassingly loud argument in a cafe one evening with a Orthodox youth pastor I knew, maybe 25.  He used a litany of outrage that dated back 600 years, he told me (and taught his young students) that Serb people have always been victims. He did what people can do — strung out a curated set of limited truths to prove an angry point. Out of nearly nowhere one afternoon a Bosniac friend, a Muslim, told me flatly that Serbs are “animals.”

Calculated, provocative, racist talk on TV did this, accompanied by fraudulent pictures — fake news, if you will. It made something ghastly unimaginably easy. The norms and requirements of Twentieth Century civilization were not enough to overcome the cynicism of a few, and a functional society was brought down, destroyed. Once started it doesn’t easily stop. [Hey, Fox, are you listening?]

This shit is way more dangerous than we are admitting.